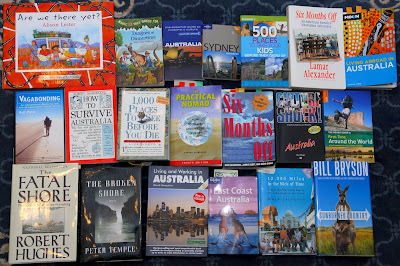 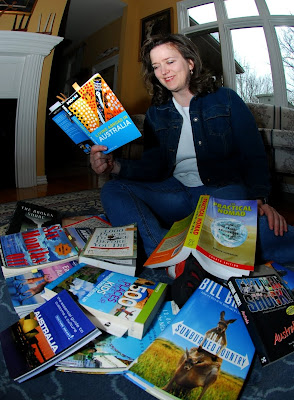 Anticipation is half the fun, right? I've been researching and trying to educate myself on all things "down under." With the dozens of books we've bought and many others checked out from the library, I thought it might be fun to keep a running bibliography. Who knows? You may just want to grab one of these titles yourself!
On my bookshelf, but not read just yet:
On the Kids' bookshelf:
I would love to hear feedback from anyone picking up these titles. Also, I would love more suggestions, especially if you know of any good books on the Aborigines, the native fauna and flora and diving the Barrier Reef. Those are deficient areas in my knowledge base.
Ciao!
Tamara
Posted by efusco at 11:58 AM 1 comment: 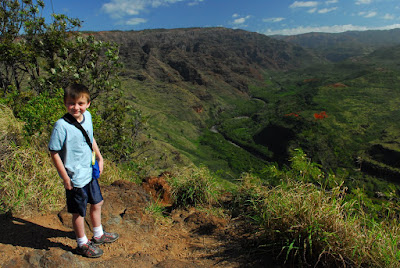 On Friday, 3-12-10, we got our around the world tickets. I'm so excited to be able to go on such a big trip! Although I'll miss my friends a lot, I'll be having so many great experiences! By the time we get back, I'll be sick of airplanes!
I have three must-do's:
1) see a koala;
2)surf at least, once;
3)come back with an accent
As my dad wrote, we will be traveling to, I think, 10 countries. I can't wait to go to Greece! My parents added Athens just for me(i love the ancient Greek gods)!
Keep in touch with me here on the blog or on my email, hcfusco@aol.com!
See Ya!
Posted by efusco at 11:07 AM No comments: 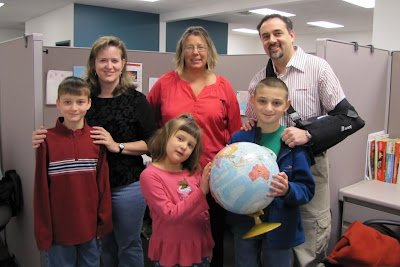 Us with our Travel Agent Lesley Palmer
with Great Southern Travel
WHEW!!!
I don't think we appreciated how tricky it would be navigating the basics of getting a Visa and getting tickets to complete our adventure.
Since our last entry we've been pretty active in pushing the process of facilitating the move, obtaining our work Visa, new passports, Australian licensure, airline tickets, our interim stop in Hawaii on the way to Australia, and informing friends, family and patients. Most odiously, the process of applying for a 457 work Visa was started very quickly after being offered the job in Port Macquarie. That particular project started with me spending approximately 5 hours online filling out electronic forms with personal details, passport numbers, and all sorts of stuff I can't imagine why Australian Immigration would need.
At the end of the application it happily informed me of the OTHER things I have to do to be granted my Visa...not the least of which was that Tamara and I would require complete physicals, HIV, Hepatitis testing, and a chest x-ray. Of course that would have been easy, but we had to have 2 passport photos attached to each form, signed and confirmed by the phlebotomist who drew our blood, the x-ray tech that shot the x-ray, the doctor doing out exam. They also had to check our passports, we had to have the x-ray personally read by a radiologist, and then we had to jump backward, naked through 3 hoops-o-fire! Ok, we didn't have to be naked...
Unfortunately, AFTER completing all the Visa stuff, we sent in our passports for renewal--they all expired in Nov/Dec. so we wanted to renew early so they'd last the duration of our trip. In the past they had not changed our passport numbers, but, apparently, the new post-9/11 electronic passports and increasing security requirements they changed all of our passport numbers. So now they don't match original numbers on the Visa application. We've been assured that it will be OK, but we're taking our old passports along on the trip now just in case...
One thing we learned is that life moves at a very different pace in Australia. Where we, in the US, have an expectation that businesses will reply to e-mail inquiries in a timely fashion, in Australia it seems to be on much more of a "when we get to it" basis. And getting ahold of Australia immigrations was nearly impossible...all the e-mail addresses returned automated replies. It was only in the past week that I got a human to reply.
But none of that deterred us from moving forward with trip planning. We'd heard about Round-the-World tickets and assumed it would work for us. The fly in the ointment with the RTW tickets is the strict rules. There are 3 different alliances of airlines that offer RTW tickets, each with their own specific requirements. Their web sites have programs that allegedly help you plan your route, but it's not quite that easy. The reality was that you could get a rough idea of what would work, but when push came to shove we could not actually book a route within the segment rules online and had to enlist a travel agent. This wasn't so easy either. There are not many agents that have experience with RTW tickets, apparently. After a couple of agents who were unable or unwilling to work with us, we found Lesley Palmer with Great Southern Travel. She patiently looked at our 'ideal' itinerary, contacted American Airlines (who's One World Round the World Ticket we'd chosen to use), allowed us multiple adaptations and changes until we found a schedule that would work and hit almost all of the locations we had hoped to see.
So, here's what we have so far:
We'll obviously work in a lot of side trips, but those destinations are pretty well set in stone.
While there are a number of things yet to be done here at home and a few things we need to complete in Australia, we feel like we've achieved another milestone in the progress of this adventure. The tickets are non-refundable, so were going come hell or high water! On Friday we're interviewing the person who will be house sitting for us.
The next entry should be by Tamara where she'll list a bibliography of the books she's been using to research and plan our upcoming adventure.
Be sure to sign up to "follow" our blog so you'll get automatic updates of future entries.
Posted by efusco at 4:18 PM 1 comment: