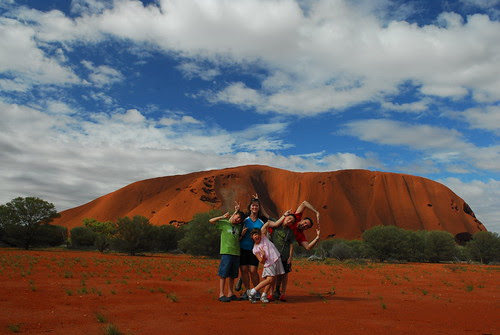 When I think of Australia, an image of Uluru (Ayer's Rock) always pops into my mind. Heaven knows that this iconic red rock has been photographed in a multitude of fashions and seen world-wide, so it's not surprising that would be my first thought. When we decided to come to Australia, there was no way we were going to go home without seeing it. In fact, this was the only trip I planned and booked for the family while we were still in the U.S. Can I just say, before going any further that if a picture is worth a thousand words, seeing Uluru in person must be worth a million! 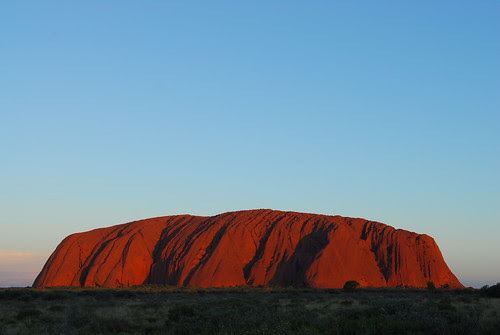 While technically in the Northern Territory, Uluru sits right in the middle of the country in the Outback. This area is dry and very hot in the summer. There is vegetation even including small trees, but there are areas everywhere of the bare, red soil. 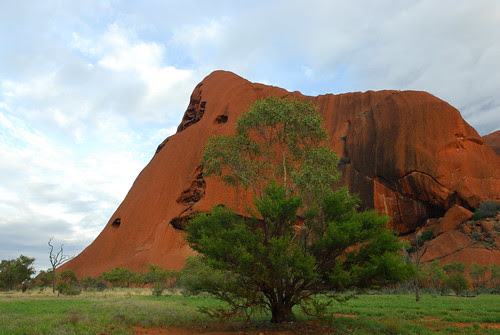 Of course, when we arrived, it was overcast and drizzling and had spotty rainfall the rest of the 4 days we were there! Just our luck! 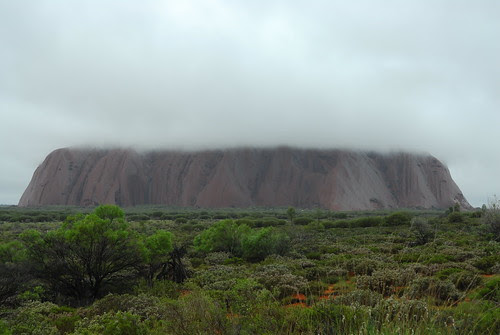 We stayed in Yulara, the resort community near Uluru. Our other choice would have been accomodation in Alice Springs, ~400km away! The kids were overjoyed that we stayed in an apartment rather than the youth hostels we have been frequenting!

Our adventure in Uluru was all about nature and Aboriginal culture. Although our Aboriginal Dot Art class was canceled due to rain threat (it was an outside class), we had 2 other hikes/classes scheduled with Anangu Aboriginal guides. Alwin, was our morning guide. 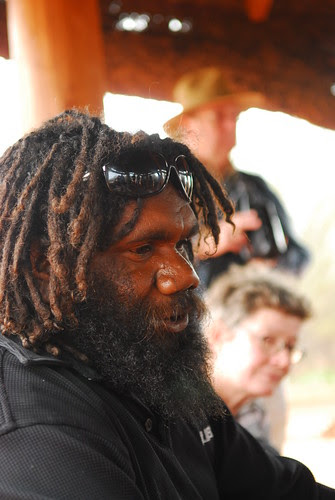 He spoke entirely in the Aboriginal language, so we had an interpreter as well. He told us indigenous stories of the creation of Uluru and demonstrated fire starting and spear throwing. 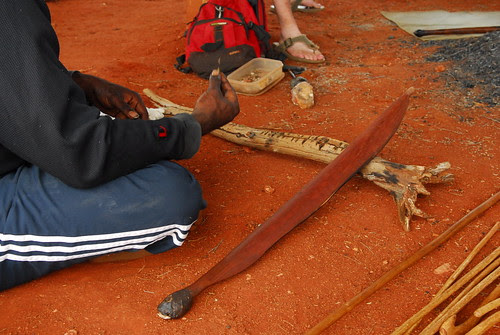 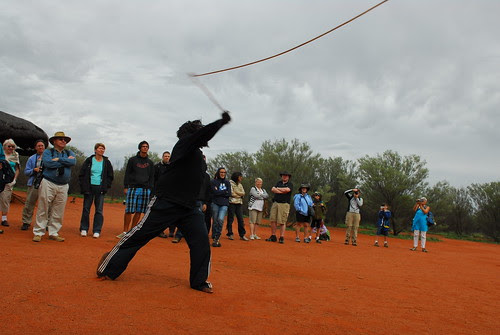 The menfolk were invited to try these activities....and grudgingly the ladies as well since we are in modern times. Evan and the boys jumped right in! 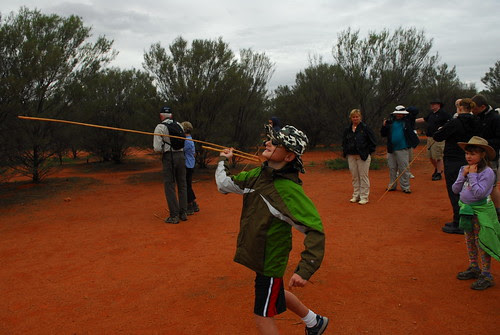 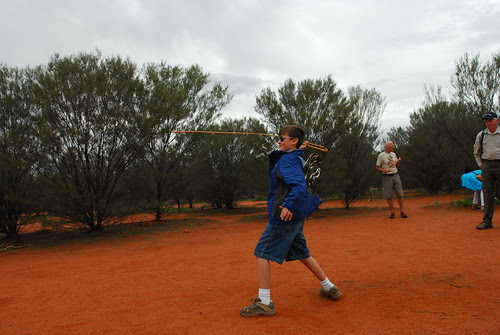 Can I say that my hunter-gatherer, Evan, was the only male in the group to successfully start a fire and hit the target with a spear using a spear thrower? We know we won't go hungry if his day job doesn't work out! 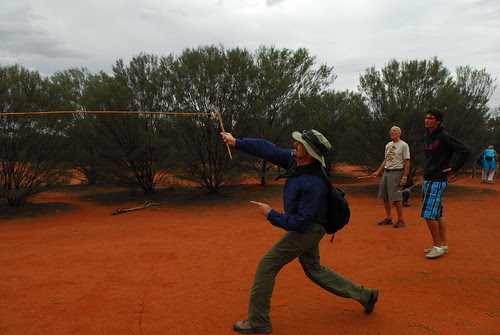 Our afternoon hike to the caves and waterhole was with Happy, an Aboriginal grandmother with her partner and grandson in tow! 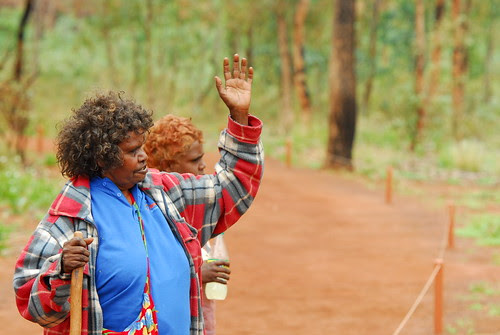 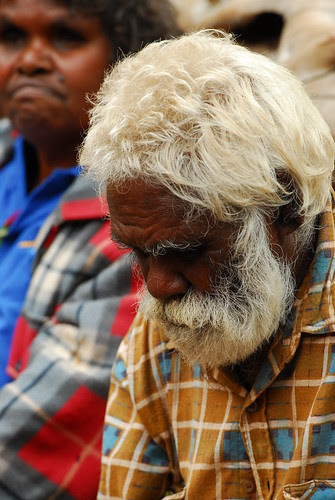 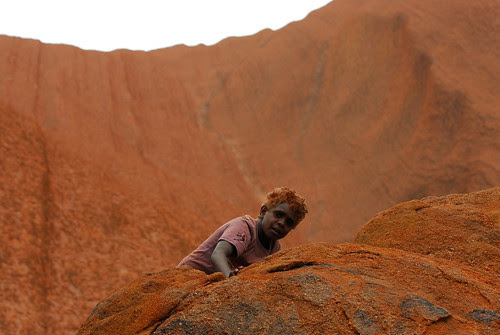 She told us traditional stories as well, but also discussed the plants in the area and “women's” tools. On a side note, although she was the guide, her partner jumped in many times to correct or augment her comments! 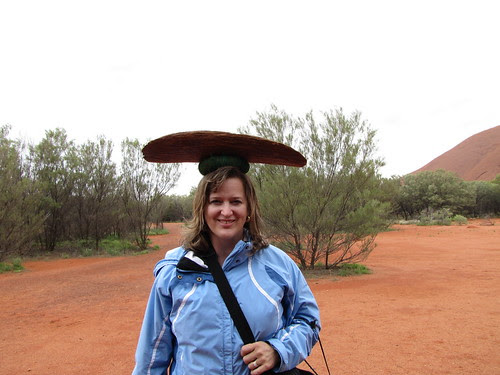 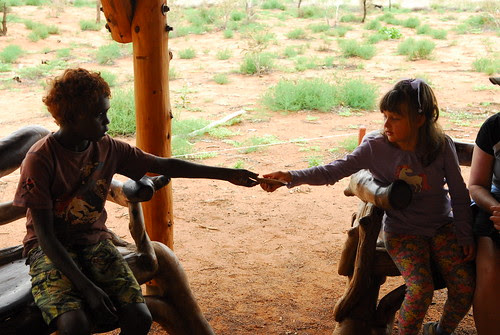 Our last full day in the National Parks, we spent at Kata-Tjuta, also known as the Olgas. Uluru seems to get all the attention, but these set of mountains (~55km away) were spectacular. 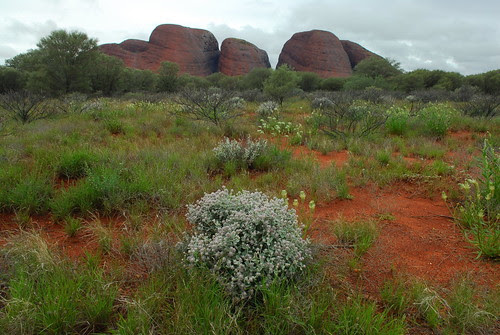 Instead of Sandstone like Uluru, these rocks are sedimentary and are dome shaped. There were no guides here, just 2 major hiking areas. The walk to the Walpa Gorge was relatively easy and the kids raced to the end. 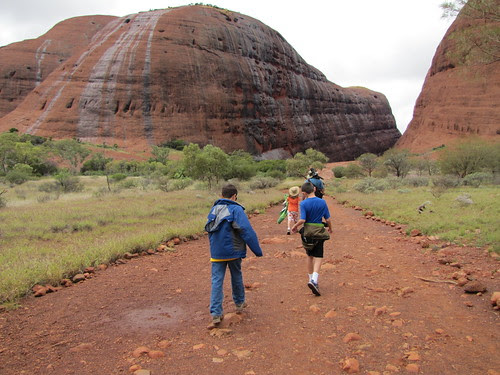 Evan, stopping to take lots of pictures, was the last to arrive at the end, so the kids' told him that he was eliminated from the race! (Yep, we're all Amazing Race fans!). 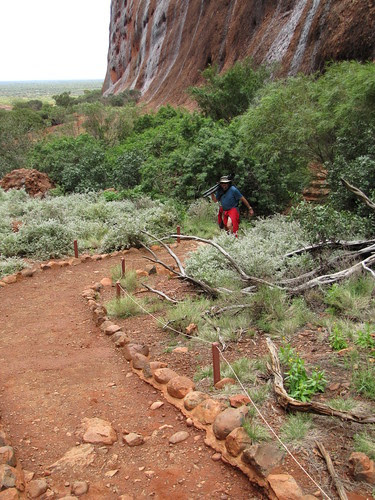 The second hike of the day, the Valley of the Winds Walk was very strenuous. It's a 7.5km hike rated “difficult” on a good day, but with our waterlogged status, we claim it as uber difficult! The kids were quite the troopers keeping right up with Evan and me! 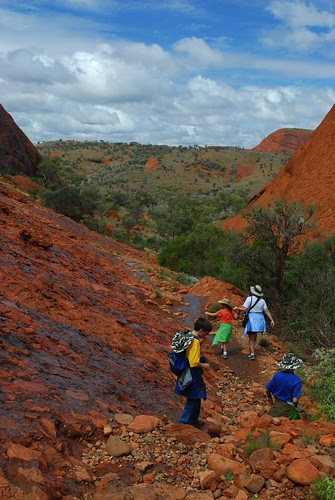 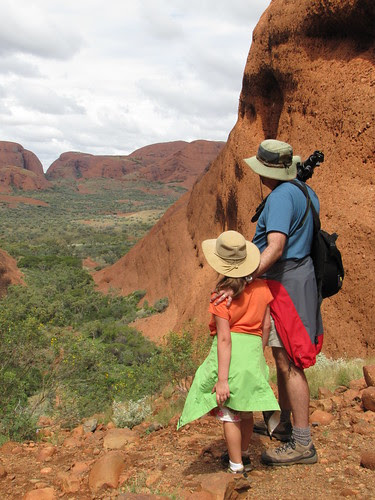 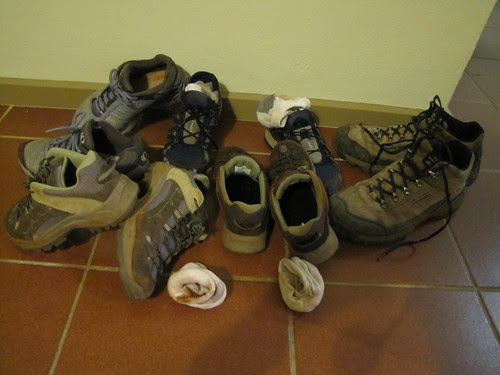 The next day we had just enough time to look through the gift stores before heading to the airport to go to Sydney, and then ultimately New Zealand! Three nights at Uluru was just enough time to give us a chance to experience the Outback, and come away with a deeper appreciation of the Aboriginal culture and the amazing environment. G'Day for now, Mates! 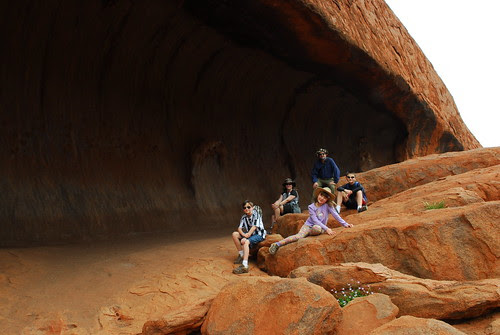 See the entire set of photos from Uluru and Kata-Tjuta at the flickr site: