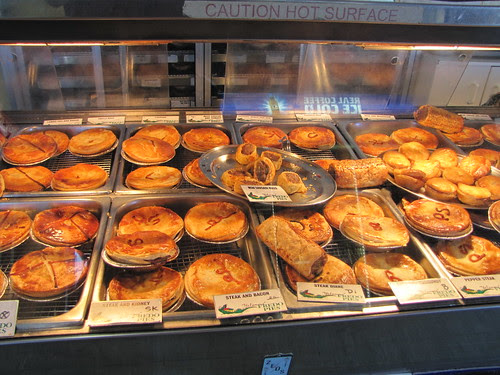 This blog is dedicated entirely to food because you know that the Fusco family is all about eating! We'll try just about anything, so let's talk Tucker! “Tucker” is what they call food in Australia. Bush Tucker would be food found in nature—grubs, snakes, honey ants, etc—that the Aboriginal peoples would survive on.

We, fortunately, have found cuisine somewhat more civilized than that where we live. In this blog we'll talk about various foods that are different from what we eat in the US and foods that are similar but presented differently as well as food that we have not been able to find from back home.

In general, food in Australia is familiar to what we have in the states, with some distinct unique items of their own. Kangaroo meat is fairly common and inexpensive. You can buy it as a mince (see glossary at bottom) or steaks. It's tasty, a bit richer in flavor than beef, but not gamey and is quite lean—so it can overcook easily—best served medium rare. 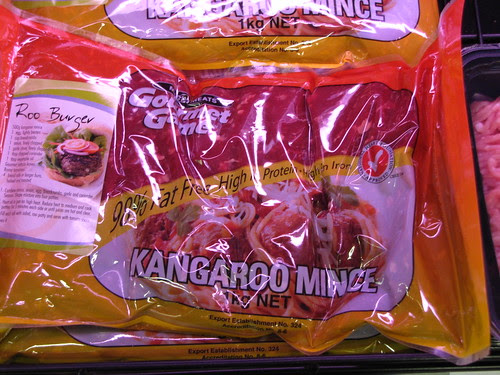 Emu, Crocodile, Camel and some other exotic meats can be found fairly easily if you look, but are less common. They don't have particularly distinctive flavors. Australian style hamburgers come with a fried egg, shredded carrot, and beetroot as well as the traditional condiments.

Meat Pies (all kinds) and Sausage Rolls are common, quite yummy, and inexpensive items served places where you might expect hot dogs and hamburgers in the US—Rugby Games, the train buffet car, and lunch diners.(see first photo) Seafood is readily available, fresh and delicious, but not really all that cheap despite our proximity to the ocean.

Barbequing is a favorite activity/food of Aussies—but it's a bit different than we're accustomed to at home. 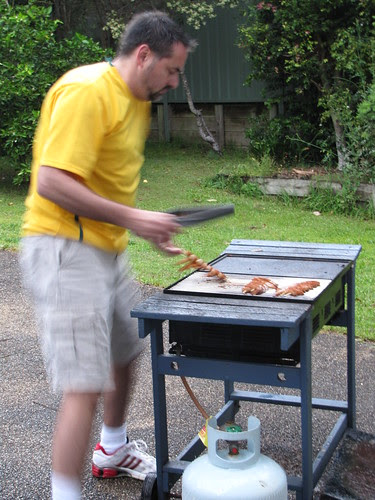 Barbeque here means only grilling, not necessarily using any barbeque sauces as we would know them. They tend to use gas or electric grills or Weber kettle style grills if they're more traditional, but a 5 lb. (2kg) bag of lump will set you back $16! We haven't seen a ceramic grill (ie. Big Green Egg) anywhere yet. Our house in Port Macquarie has this lame little flat gas grill that is nearly impossible to properly cook a steak on, though it is adequate for shish-kabobs, shrimp, burgers and sausage. Like pork ribs? Forget it here—they'll sell you a package of 3 separated ribs for about $5, but you'd have to special order a whole rack of ribs and I have no idea what it would cost you. Steaks are available, but 1/2” thick sirloin seems to be the most common and affordable, a real Scotch Fillet will set you back $20-25 raw and more than that in a restaurant. 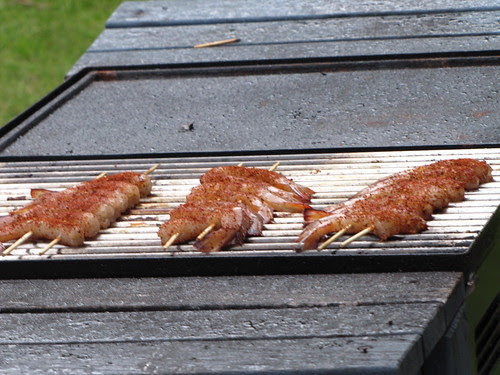 Mayonnaise is a thinner runnier version of what we have at home—taste is similar, but maybe a bit sweeter. Ketchup is called tomato sauce and comes in these cool little individual serving containers. 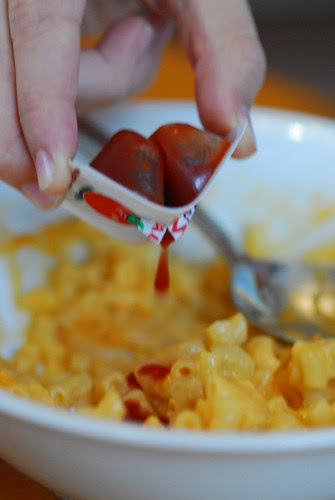 Potato chips, chips (fries), and crackers are often available in “chicken” flavor—we think it's basically chicken bouillon powder and while tasty at first leaves us feeling queasy after a bit. 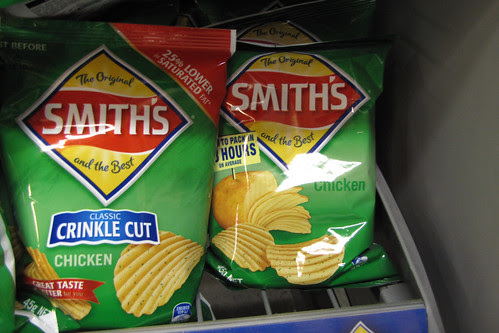 Most traditional snacks are available with notable exceptions of Cheetos and Fritos which we haven't located anywhere. They have a cracker brand called Jatz that we love. They look like Ritz crackers, but are more firm and are awesome for dipping and spreading stuff on because they won't break. They have a good flavor (not as buttery as Ritz though) in the original and also come in a black pepper version. We take them on train trips and for lunches when we're out exploring because they hold up so well to travel.

A typical train or exploring day lunch for us consists of water to drink, oranges and/or apples, Jatz crackers upon which we'll spread liverwurst, cheese spread, or peanut butter. This tends to be fairly inexpensive, filling and easy to carry about. We've also experimented with pate, salami, hard cheese and a few other toppings to keep things from getting too repetitive. 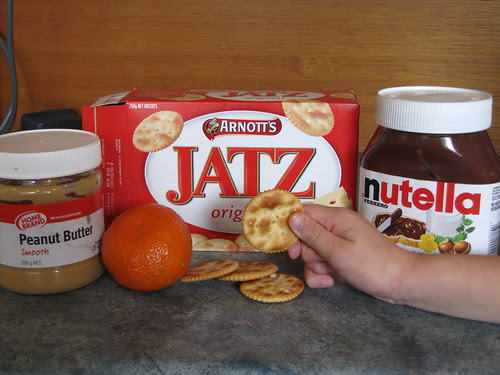 Brekky foods are similar: eggs, pancakes, cereal, etc, but there are some difference is bacon. The bacon, sold as “middle bacon” includes the usual bacon strip and a circular piece of ham at the end with a rind running along the length. Tamara has been dying for some breakfast sausage patties, but we have not been able to encounter any!

No blog on food would be complete without mentioning desserts. Our favorite cookies (known as chocolate biscuits here) are Tim Tams! 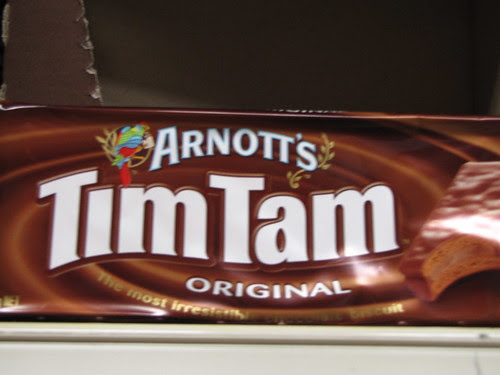 These are basically 2 chocolate crisp cookies covered in chocolate with variations on that basic theme: mint, caramel, dark chocolate, black forest, white chocolate, etc. A very Australian dessert is lamingtons which consists of sponge cake dipped into either chocolate or strawberry or other flavoring and covered with shredded coconut. It is not a favorite of the family's (except for Tamara, but you know she'll eat anything with chocolate!). We have not tried pavlova yet, but have heard that it is a traditional Australian dessert with a puff pastry topped with fruit and cream. We'll let you know on that one!

Restaurants come in all varieties, but they are in much different ratios of ethnicity and types than we see in the US. Fish and chips shops are everywhere and are universally good. Most also serve calamari (squid) rings which are popular here. A lot of the upscale “chipperys” will even let you decide which type of fish you want with your fish and chips like barramundi or cod! There are a plethora of Asian food restaurants—I'd say that either Thai or Indian is the most prominent, but we see a lot of Malay, Chinese, and Japanese as well, with a spattering of Vietnamese, Korean and other less common Asian cuisine. Laksa, which is a curried coconut soup with noodles, bean sprouts, fresh herbs, and your choice of meat (I like it with prawns) is a new found favorite of ours! 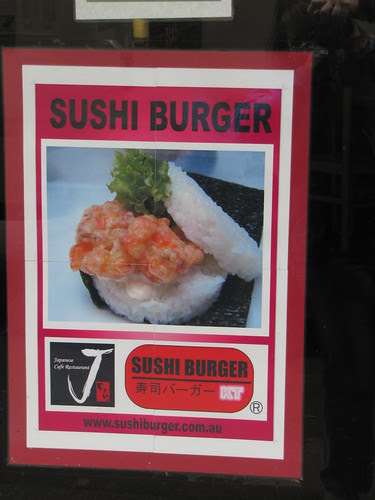 US style barbeque is rare and expensive as are Mexican restaurants—there are tiny shops where you can get nachos and a few Qdoba/Chipotle style Burrito places. But if you want a plate of fajitas or a nice combo platter you better be ready to lay down $25-30 before drinks and sides. We've found that the finer restaurants are not much more expensive than the more generic ethnic places.

Alcohol is interesting and could be a blog in itself. Most restaurants are “BYO” charging small to moderate corkage fees (sometimes a dollar or two, sometimes $11). This, along with the fact that tipping is not expected, helps make the otherwise expensive menus a bit more tolerable. That is, in part, because wine is very reasonably priced. We can buy a 4 liter box (equivalent to 5 and 1/3rd bottles) of wine for $12-17. 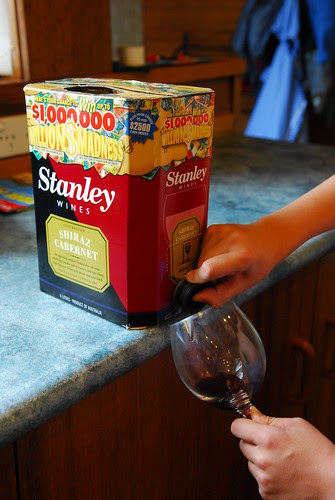 By the bottle wine can be purchased for anywhere from $4 up, but often the Australian wine names you'd recognize in the US will sell for $7-20. Very good bottles can be had for $10-11. Beer and spirits, on the other hand, are quite expensive. I bought a 6 pack of a popular beer called XXXX Bitters—I'd expect to pay $7 for this in the states, but here it was $17! Even Budwiser is $14/6-pack. On sale you can buy a case of cheap beer for $40. I haven't priced much in the way of spirits, but they're high—a decent bottle of Scotch will be $70 easily. 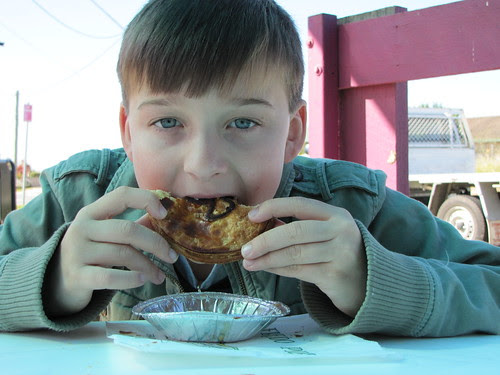 Today is all about the food I have eaten in Australia.

First up, kangaroo, emu, crocodile, and other meats in Australia. Kangaroo is a meat which, to me, tastes kind of like in between hamburger, steak, and almost tastes like the baby roo was eating spices for food forever. Emu tastes like kangaroo and duck mixed. I've only had emu one time so far, so I want to try it again. Now comes crocodile. I can't describe croc that much, other than it tastes like chicken. Another cool meat we've tried is camel. Camel is okay, I can't really explain it, but I am glad it was only “okay” because camels are related to llamas and I love, LOVE llamas. (I have a stuffed llama named Juan.) Other than that we have the typical hamburger, beef and chicken. We also have liverwurst. We eat that too often.

Now drinks. We have Australian lemonade, which is like fizzy lemon flavored water. It is a clear color. And lemon Squash, which is our American-type lemonade, which is a glowing yellow color. They also have sarsaparilla, which is a root beer type drink that is tangy, yet is practically the same thing. A family favorite is ginger beer, which is like root beer, but with ginger. At first it is sour, but you get used to it and it tastes great. The Fusco gang, that's us, is drinking hot tea a lot more. Tea is a very traditional thing in Australia, probably with the bonds with Britain. Another family thing is iced tea. We make hot tea in the morning, drink some ,then stick the rest in the fridge. {dad: iced tea is uncommon and expensive in restaurants, it comes in a small glass and there are no free refills}. We also like lemon/limeade, which is all in the name.

There are no Fritos. If you ask for chili, you will get sweet chilli sauce as in the pepper. There are sweet chilli crisps (which are chips in the US), chicken, cheese, and original crisps. Chips are french fries. You can find them almost everywhere.

Moving on to soups/noodles. A family favorite (espcially mom) is laksa. Laksa is a Malasian noodle dish floating in a curry broth. It is best served with prawns, which are shrimp. There are lots of similar pastas as in the US, but there are a lot of Asian nooldes and food too. I can't say much about this category, sadly.

There are almost no Mexican restaurants in OZ. I you find one, they are super expensive. Burritos are like $30 and two tacos for $25. I am really dying for some taquitos. There is a lot of Asian, Spanish, Indian and European food for cheap prices though.

Seafood: Other than the tons of tropical fish I cannot name, there are scallops, prawns (which you can find at least 3 kinds of without trying hard) & mussels.

Finally, “Other”: Murtabok comes first, it is a Malasian dish which is like a loaf of stuff like pasta & meat smashed together. Also, Vegemite, which is a salty yeast (& malt) based spread. I don't like it, but will try it again. 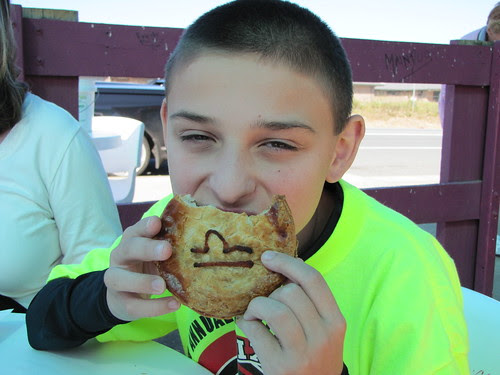 Today I will write about Aussie foods. My favorites are Tim Tams, kangaroo, and camel. Camel tastes like beef, except not as juicy. Kangaroo tastes like a cross between steak and hamburger, but not as good as steak, but better than hamburger. Tim Tams are a thin chocolate cracker/cookie that tastes perfect. They com in Original, dark chocolate, white chocolate, mint, dark forest, double chocolate and caramel. So far, dark chocolate is my favorite. 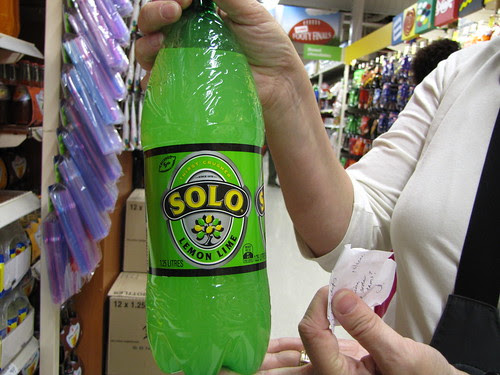 Now for chicken flavoring. It's odd how they put chicken seasoning on fries and chips and they really taste like chicken—it's surprisingly good. Next I will tell you ketchup/tomato sauce packaging is different. (see photo)

Last but not least, we cannot find cheap Mexican restaurants, and there are tons of Japanese restaurants but non that cook in front of you, and you cannot find good Italian sausage.

Stubbie=small (ie. 12oz) size beer in bottle or can

Pie=usually refers to a Meat Pie—we might call it a “pot pie”--but very common food at ball games.

Kabob=beef or chicken or lamb served in a wrap similar to a Greek gyro.

Macca's= McDonald's aka the golden arches

Cask wine=wine in a box

Counter meal=meal in a pub (usually ordered at the bar)

Plonk=cheap wine (we drink a lot of plonk!)