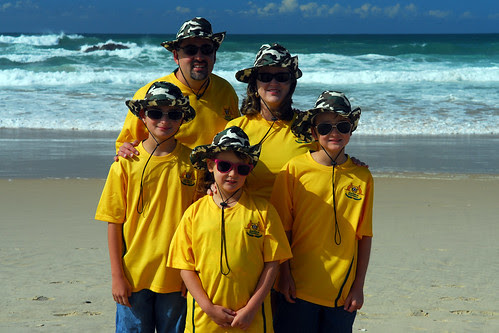 How ya going, mates?

After four years of planning, saving and dreaming we bit the bullet and 'Bob's your uncle'-- the Fusco family is in Australia having the walkabout of a lifetime! Up front we'd like to apologize for the odd way we're doing the annual letter this year, but the distance and Post costs were prohibitive to our being able to mail out letters. We hope you enjoy the photos on the cards we did send out and appreciate Tamara's sister, Tiffini, bringing them home from Oz and sending them for us. There are more Christmas pictures at our Flickr site. http://www.flickr.com/photos/efusco/sets/72157625404625703/

Also, the letter will be a bit limited in content/details because we've put all the details of this trip, since serious planning started in February, into the blog posts below. For those of you who have not been following us on our adventure, “have a look, Mate” at the blog posts that start in February. We cover a range of topics, trials and adventures, and there are lots of nice photos (for those who would rather not slog through the thousands at the flickr site) that accompany each blog post, so “have a go!”

First though, let's back up a bit... In January we took our usual annual trip to Colorado for skiing with the Graves. As always, it was a wonderful visit and great time skiing. It was the first year for us to really ski together as a family since Amarra really took to skiing. We were all over the mountain and she just did wonderfully. The boys continue to advance in skill as well, and I have little doubt that they'll be blowing past the old fogey parents any time. Evan's sister, Danielle, even came up from Colorado Springs for a visit. Unfortunately, it won't be in January of 2011 since we'll be stuck in Port Macquarie suffering through summer on the beaches doing the Australian slip, slop, slap! (Translation: slip on a rash shirt, slop on sunscreen, and slap on a hat.) 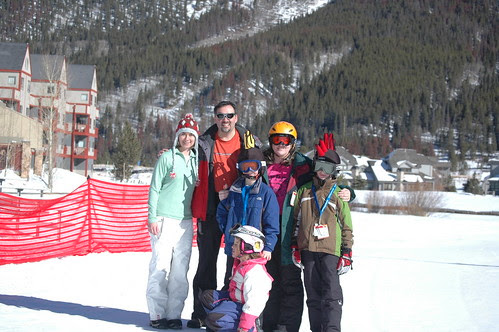 Evan had a conference in Las Vegas in February and the entire family came along for the first few days. I'm sure the kids found the experience pretty eye opening, as anyone does on their first visit to the city of lights. No, we didn't go to any red light revues, but did have a great time at the Mac King comedy show, with Brendan being Mac's assistant. We pretty much stayed to banker's hours and the more tame areas of the city. While Evan was in meetings, Tamara rented a car and took the kids out to Hoover Dam and Red Rocks. We had a great time, although it's very different visiting Vegas with kids than without! 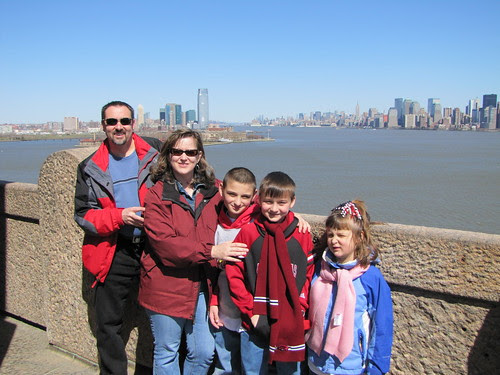 Then, in March, we took a much belated trip to New York City for Spring break. Neither Tamara nor Evan had really visited the city, we're ashamed to admit and the kids were eager to see some sights. While our time was limited, we tried to make the most of the experience. The boys became expert navigators of the subway system as part of their 'training' for our 'Round the World' adventures. We hit all the touristy highlights including a Broadway showing of Mary Poppins. We visited the Ground Zero site. Despite the fact that the boys were only 2 years old on 9/11 and Amarra was not yet born, it was a pretty emotional experience for all of us to visit the memorial at the site. Heath was actually inspired to write a song about 9/11 that he titled “Falling Down” that is incredibly insightful for a boy of only 10 years making his first effort at writing something like that. Later on, his Uncle Brett helped put the song to music though we're still waiting for him to record it. We visited the UN, which really needs some major renovations, the Statue of Liberty, Union Station, etc. Perhaps the highlight was a fantastic Italian meal at Carmine's—wow, this picky Italian family was very impressed—and stuffed! 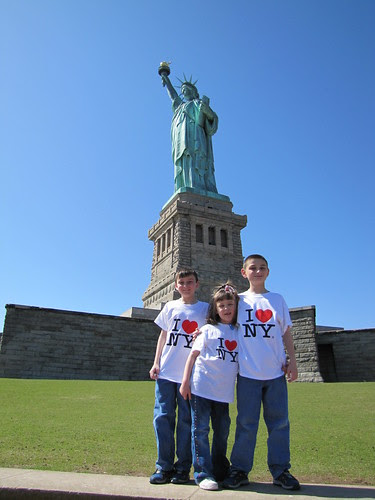 After that we were a bit more home bound as we saved up for the trip. We made it to a St.Louis Cardinals game, spent time with friends and family at the Lake House and worked and worked. 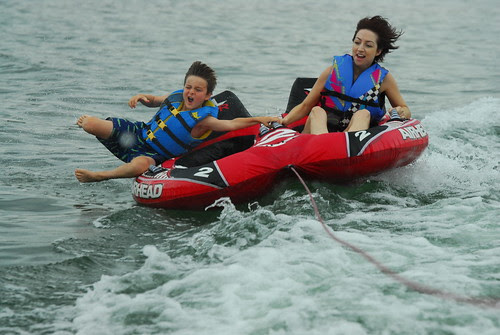 We had a lot to do to prepare for the trip as we found a wonderful house sitter in Kristi Burch and her 2 daughters Kelsey & Kinlan. We had to arrange for bills to be paid automatically, we had to 'winterize' the lake house, and we had to arrange for all the everyday matters we attend to to be taken care of either automatically or to beg family to help us—which they very generously have. Evan even managed to part ways with his beloved Prius for the duration of the trip thanks to the TLC his Uncle Ed is giving it up in Indiana.

Just to create some necessary panic, Brendan got sick a month before we were scheduled to leave with mastoiditis (infection of the bone/cavity behind the ear). He spent 2 days in hospital on antibiotics and had to have a myringotomy (surgical hole in his ear drum) to allow the infection to drain. Ultimately he made a full recovery, but that was certainly not planned or fun for anyone, especially Brendan. 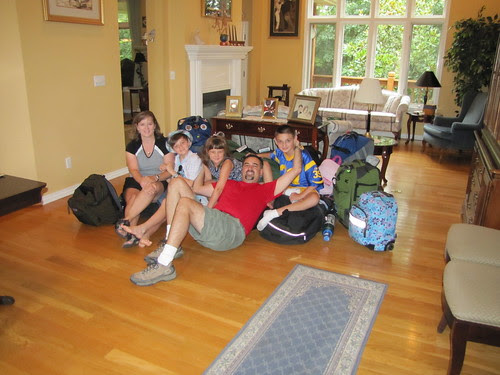 Finally, on August 5th, Evan finished his last shift in the ED and with multiple family members in attendance we boarded our first plane in Springfield bound for Los Angeles, then on to Hawaii where we spent 5 days relaxing and contemplating our coming adventure. 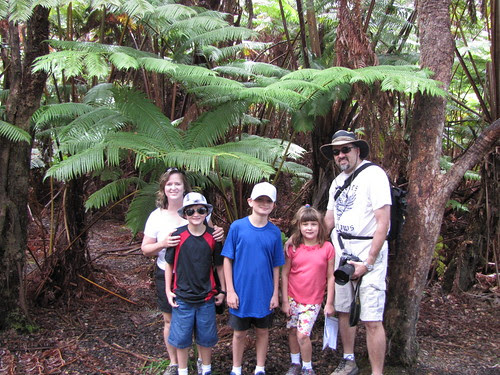 While things have not gone strictly to plan up until now, it's been a great example of how you must be flexible and adaptable when traveling for the kids. We spent 2 months in Australia without a pay check or work because of red tape and administrative issues. However having the Aussie attitude of , “She'll be right, Mate,” we, fortuitously, managed to find work in New Zealand for a month, then returned, just recently, to Port Macquarie with all the credentialing issues resolved. Finally Evan is working at the job we intended to have to start with. The people here are great and we're sure it'll be a nice 3 months. Our savings have taken a pretty big hit, but we'll survive by living conservatively. We briefly stayed in the same purple house we had the first 2 months here, but are moving to a smaller “Holiday Apartment” for the duration of the trip that will, hopefully, be easier to care for, has a pool and game area, and is much closer to the beach. If anyone wishes to write to us, the address there is:

Of course, we're big email people, so efusco@aol.com or tlmfusco@aol.com will work too...and we're always posting on Facebook and usually have a new blog post every 2-3 weeks.

We will eventually return home about April 22nd. But not before a paid “holiday” in Vanuatu and a return visit to New Zealand to see the South Island—which we didn't have time for when we were working. Then the rest of our 'Round the World' adventure including visits to Tokyo, Hong Kong, Thailand, Cambodia, India, Turkey, Greece, Egypt, Spain and France all crammed into the last 2 months of this trip. I wish you could all see just how much the kids have matured, changed and grown during this sabbatical, and we can only dream of how much they will change and learn during the next 5 months. What we dreamed of is for them to become more worldly and to appreciate other cultures in a way that so many Americans lack. We can already see the changes!