Diving back into Australia! 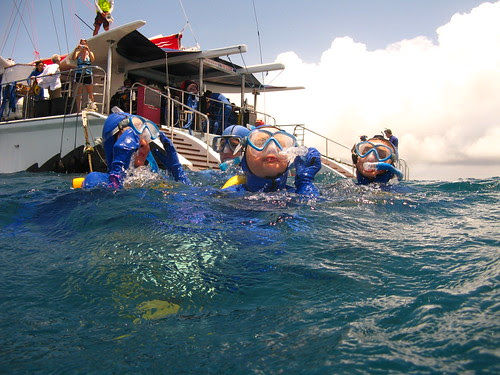 *As always, click on any picture to see it larger and to go to the flickr site which is replete with photos.

We're back where it all began—the purple house at 9 Scarborough Close in Port Macquarie, Australia. At least for the time being. 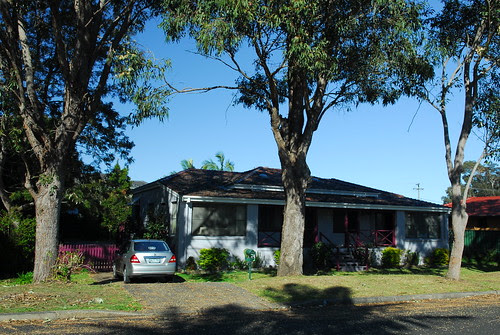 In the last blog we mentioned that Tamara's father, sister, brother in law & nephew had come down for a visit and we'd met up with them in Sydney. We had a nice tour of the usual tourist spots around Sydney including the Opera (soon to be Oprah) House, Sydney Tower, Circular Quay, Darling Harbour, Paddy's market & etc. 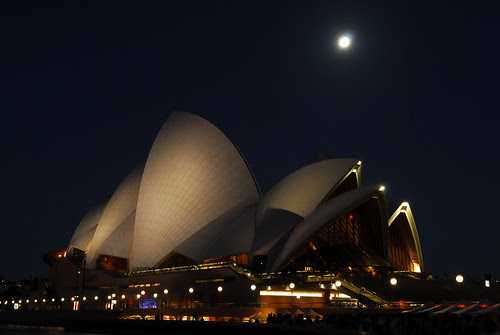 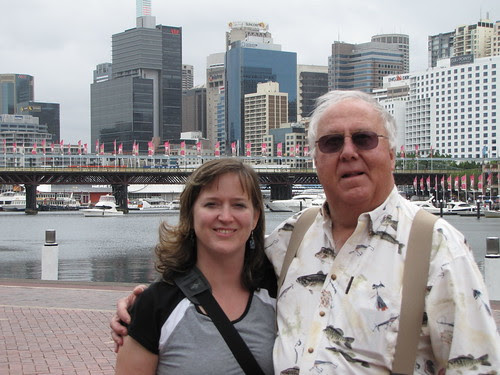 After that we boarded a Qantas flight up to Cairns (pron. Cans), an area none of us had seen before, but a popular jumping off point to see the Great Barrier Reef, rain forests, and the far north coast. We enjoyed a really nice reef tour with Passions of Paradise Tours . 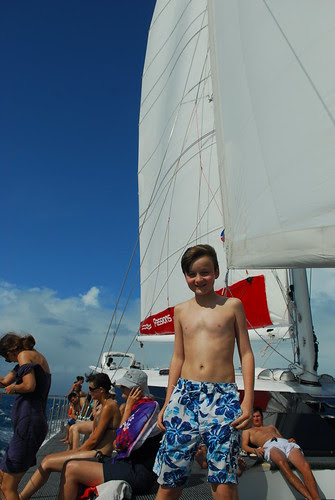 An all day trip complete with gourmet lunch, scuba diving for mom, dad, Tiffini and Kerry, glass bottom boat tours for Tamara's dad and snorkeling for everyone but her dad! It was quite exciting snorkeling with the kids, they struggled, but ultimately enjoyed the experience with Brendan, Heath and Mom actually seeing a shark! The diving wasn't as spectacular as we had hoped, the water was hazy due to the chop and season. We'd sure like to see the outer reef during winter and dive that sometime. 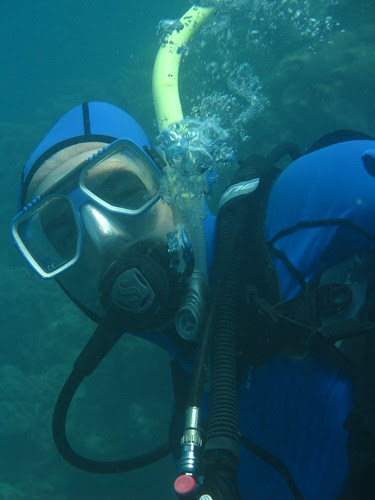 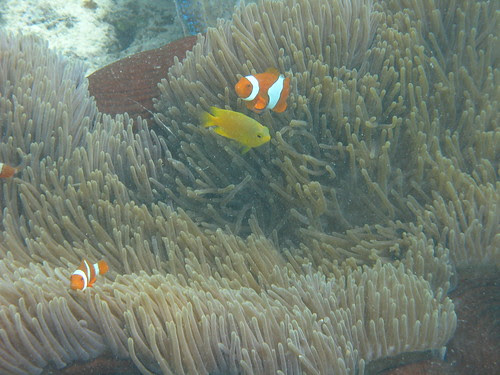 We also drove as far North toward Cape Tribulation as conditions allowed, but heavy 'wet season' rains and a flooded road kept us from going too far. 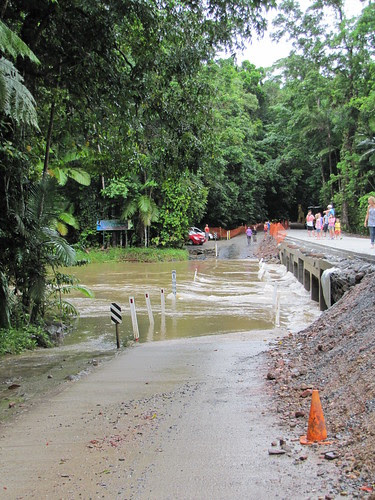 We did enjoy a nice rainforest stroll at the Daintree Rainforest Discovery Centre. We learned about the frightening Stinging Tree, or Gympie Gympie as the aboriginals call it. As if the fauna of Australia aren't frightening enough, this rather innocent looking tree has tiny silica needles covering every bit of it (trunk, stems, leaves) that merely brusing up against causes them to imbed into your skin and causes excruciating pain that can last for weeks. And even after the initial pain resolves it can be reactivated by touch, cold, or heat. Horses have been known to go mad and kill themselves after coming into contact with these babies! We did successfully avoid them. 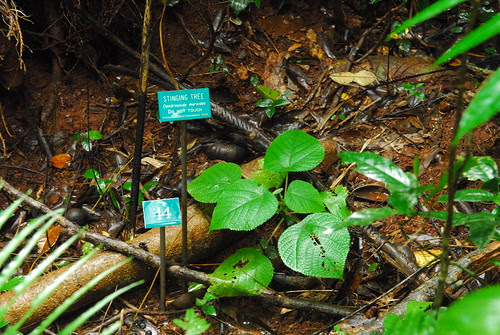 After a too short visit to Port Douglas we had to turn around and come back to Sydney for a night before heading back to our prior temporary home of Port Macquarie. 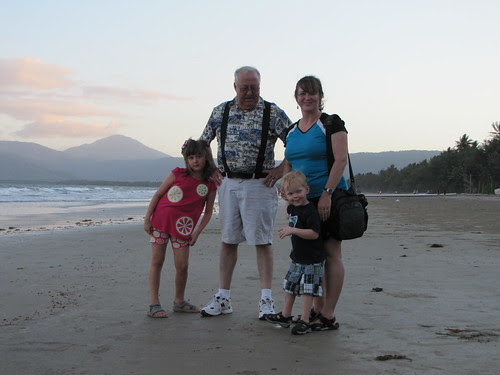 Time here was more relaxed. We visited the Koala Hospital where the kids used some of their allowance savings to adopt a Koala, Bonny Willy (click link to read his story), which helps support the privately funded hospital—the only of it's kind in the world. We went for a swim on Lighthouse Beach (near where we'll soon be moving—see below), and drove up to Dorrigo National Park to hike to one of the beautiful water falls. 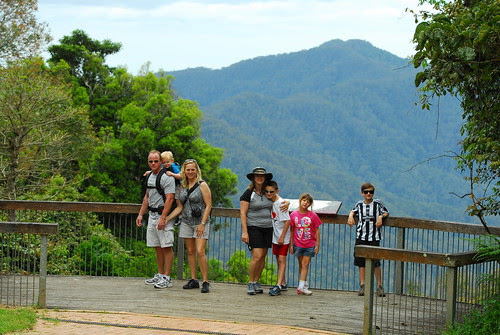 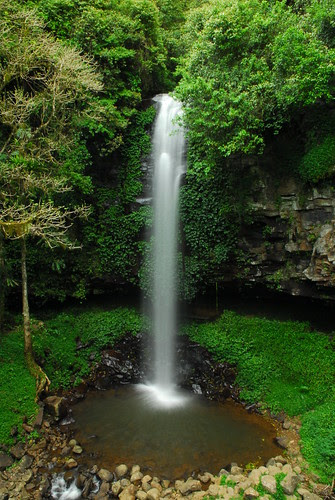 On Monday the 29th of November, a full 9 months from when he first began the interview and application process and more than 3 months after our initial arrival in Australia, Evan finally had his first day of work at Port Macquarie Base Hospital in the ED. What a relief it was. The job here has similarities to my job in New Zealand in that it is a teaching environment, but it is also different in many ways in that ancillary services are run by contractors and are thus much more efficient, no more begging to do CT scans or even MRIs. Evan is considered a “Staff Specialist”, which means somewhat lower pay than the VMO (visiting medical officer) contractors, but the benefits of a full time physician including paid leave. If he was staying longer there is even paid CME and almost 2 months total paid time off. Patient load is small b/c there are registrars, interns and contract medical officers who see most patients. As in New Zealand, there are no night shifts, but he will be working Christmas.

On December 1st Tamara and the kids went down to Sydney again to see off her family returning to the US. Sad to see them go, the first bit of 'home' we've had since leaving almost 4 months ago—hard to believe it's been that long—4 months. And we still have almost 5 months to go before we get home again

December 1st also marked the first day of Summer in Australia, but you'd never know it from the weather—still fairly cool and rainy. We hope to take advantage of a move to a smaller, but a bit more comfortable accommodation in a “Holiday Apartment” at the Oasis Holiday Apartments near the previously mentioned Lighthouse Beach. It's still a bit further from the center of town and our expat friends, the Ross's, but it has a pool, game room, faster (if pricy) internet, and should be a bit nicer than the house we're in now. We'll be putting up a small Christmas tree and we've purchased a few ornaments during our antipodean travels to decorate with. In other exciting news...Tamara will be learning to drive on the left—gonna have to so she can run errands when Evan is at work.

BTW, Christmas Cards will go out this year to the usual suspects. But the Christmas letter will be a blog post and photos on the card itself and online. Keep an eye on your mail box!