Tokyo—Fish out of Water and on our Plates

Tokyo—Fish out of Water and on our Plates 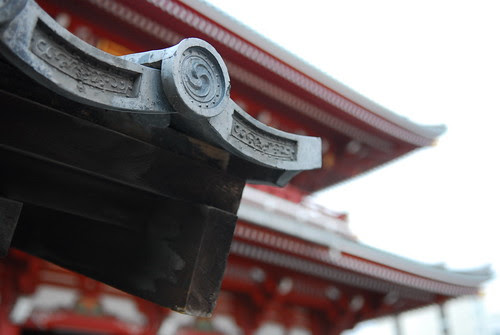 Yes, we know it's a foreign country, and they speak and write a different language. But it's modern, it's international, lots of people speak English there—right? Well, yes and no.

Tokyo was our family's first ever foray into the Far East and despite all of us, Tamara and I in particular, being experienced world travelers, Tokyo was a challenging place to visit. We flew in on the wonderful JAL airlines from Sydney on an almost 10 hour flight. We were happy to find that we could take a slightly slower train to our hotel than we'd planned to, but it saves us $120 over the Express train. 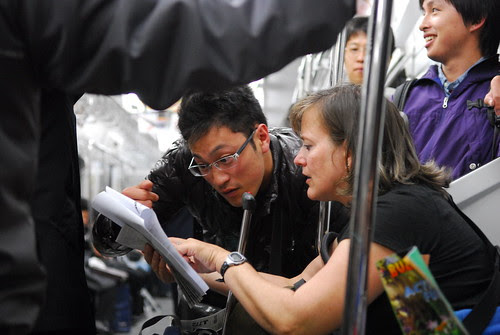 And, fortunately again, our written directions were fantastic and we emerged from the train tunnel practically in the doorway of our hotel. Check in was fine and we were all excited to stay in a “real hotel” instead of a youth hostel for a change. But that excitement was pretty short lived as we found our rooms to be very small typical Asian businessman's style rooms. Tiny little bathrooms, a bed closer to the size of a double bed than a queen and with a 10' long and 3' wide stripe of carpeting that was the “open” area of our rooms. All 3 kids wedged into one room meant for 2, Tamara and I in another. There was a TV, but none of the channels were in English..and neither was the remote control. There was free internet—and that was very much appreciated. In any case, we were tired and all managed to sleep just fine despite the “cozy” accomodations. On the plus side, each toilet had a built in bidet and 'cleansing' feature! 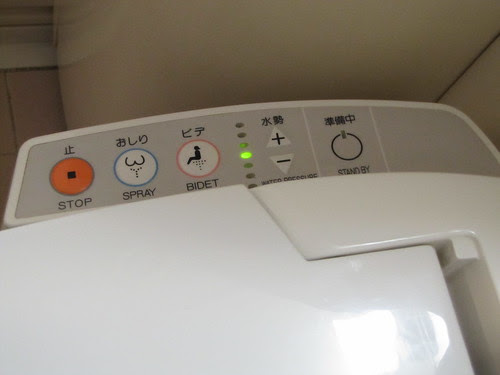 The next day we arose bright and early partly because of the time change and in part to get a jump on the day to explore the Ueno (way no) Park and Asakusa (Saa coo sa) areas. Ultimately our efforts were pretty much wasted as nothing at all was open when we arrived. We'd hoped to find an easy breakfast, but ultimately had to find our way back to the more urban area and...wait for it....McDonalds! Apparently most Tokyoans eat breakfast at home, or if they find one of the few restaurants that are open for breakfast they tend to eat pretty much the same things they would eat for lunch or dinner—noodles in broth with a piece of meat. Finding a “Western” breakfast is quite difficult and even those places who do have something familiar don't quite get it right. We've managed to stay away from McDonalds and other Western food places this trip, for the most part, but none of us had eaten for the past 15 hours and were starving so we gave in. 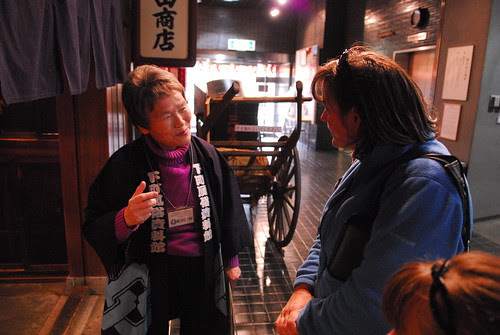 Once we finished all the various museums and other sites were opened up. We explored the small but very nice Shitamachi (sheet uh ma chee) museum and had a guided tour to see what the traditional Japanese home and merchant's shop would be like. We all got our fortune from the oracle and really learned quite a lot in this small but very nicely done museum. We then headed to the enormous and overwhelming National Museum. The did a good job with displays here as well. 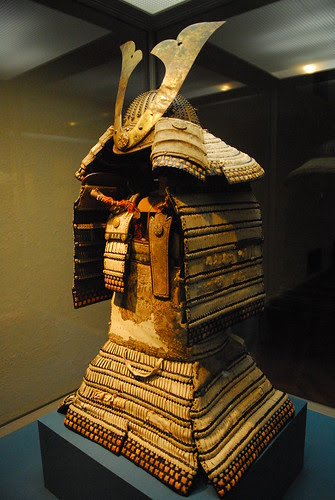 We saw only a fraction of their total holdings, but saw some amazing things. Some of their writings are 600+ years old, but look like they could have been written yesterday. It was really amazing considering how faded our own US constitution and Declaration of Independence are—and they're less than 250 years old. Other painted scrolls and fans were so richly colored as to look like they could have just been painted as well.

We found a nice little place for a bento box lunch, Heath had the barbequed eel, Tamara and I sushi and Brendan and Amarra some tempura and sushi. 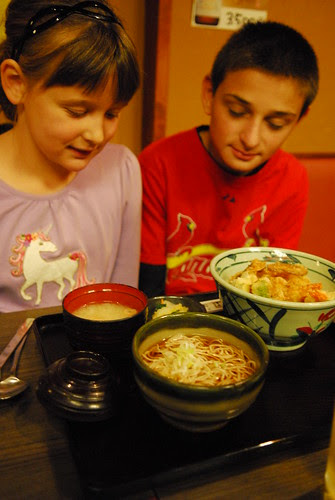 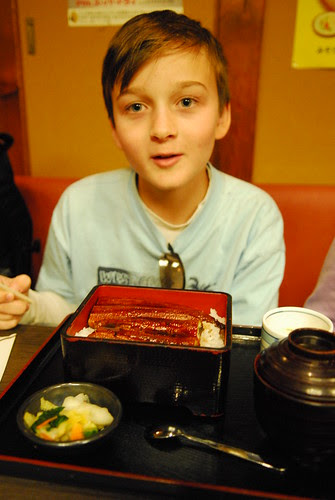 We'd anticipated prices to be really high, but this was actually quite reasonable (compared to Australia anyway) and quite tasty. After that we met up with my 2nd Cousin, Henry Ahlgrim—my dad's cousin who's lived in Tokyo for almost 15 years with is Japanese wife. He showed us around the Asakusa area and it's shrine. 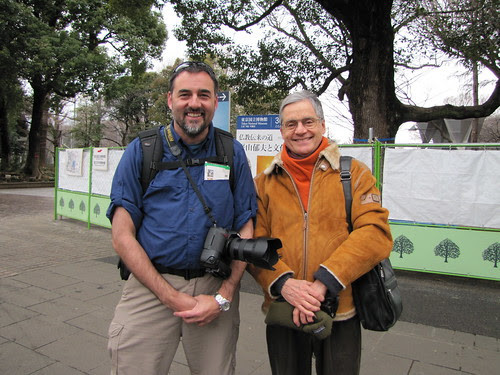 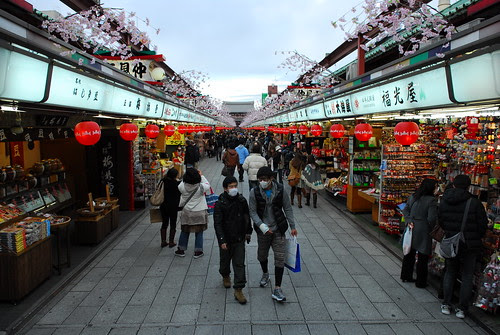 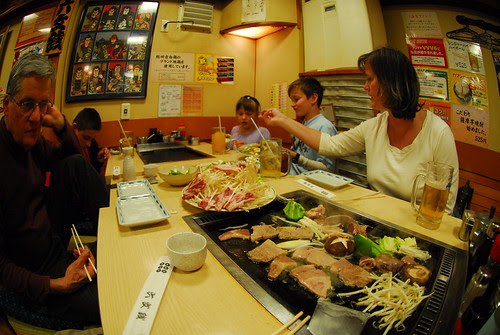 He then helped us find really nice place for dinner where, again, we spent far less than we'd expected for a meal that more than filled our guts and where we had a wonderful traditional Japanese dinning experience. He took us all the way 'home' to our hotel and didn't even expect a good night kiss for his efforts! It was great to meat a local and family member who I'd never met before. 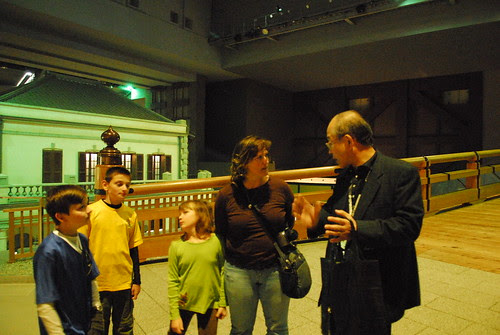 The next day took us to the East Sumida area where we had another, free, guided tour of the absolutely amazing Edo-Tokyo Museum. Our guide was a retired McDonald Douglas engineer who'd lived in California for 4 years and absolutely brought the history of Tokyo to life for us. Most of the displays there were not in English and we would have missed so much if not for his enthusiasm and English skills. Still, this place is must see even without a guide—just exquisitely done in a modern building and amazing dioramas of the various stages of the city of Edo as it evolved into what is now known as Tokyo.

We had another very cool lunch at a Sumo themed restaurant, as we were right next to the main Tokyo Sumo arena and hall of fame. 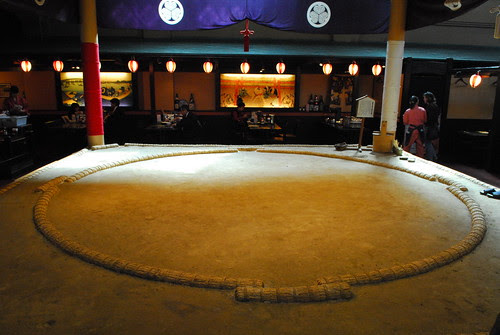 No English menus, but the waitress walked us out to the realistic plastic display outside and we just pointed at we wanted. 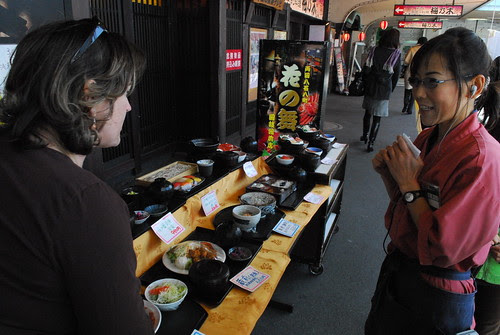 After the meal Brendan purchased some Sumo trading cards and they gave us a free lithograph to take home. Again, a great sushi and soba noodle meal, Brendan enjoyed the traditional Sumo Stew (apparently a high calorie meal the sumo wrestlers consume in huge quantities) all at a cost far below what we'd budgeted...a very good thing. 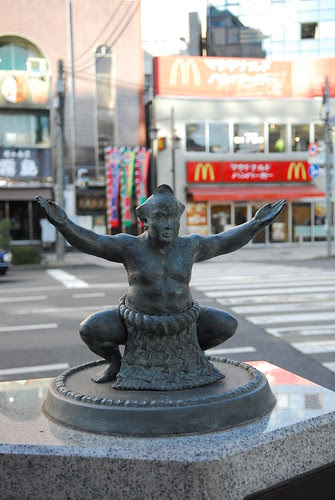 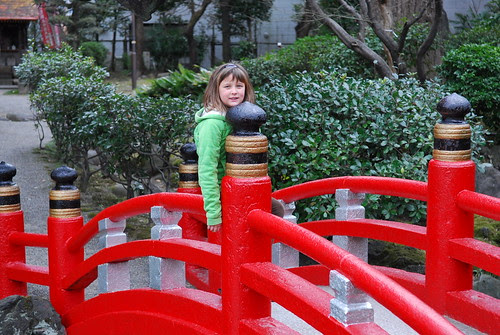 After lunch we took a quick tour of the Sumo Hall of Fame, then through a cute Japanese garden to the Tokyo Earthquake Shrine and Museum. There was a terrible earthquake in 1923 that killed a handful of people in the initial quake, but that triggered a massive fire (the bane of Edo and Tokyo over their history is fires wiping out much of the town and it's people) that ultimately killed some 60-100,000 citizens. Amarra honored them with a small wish and a donation in the shrine. 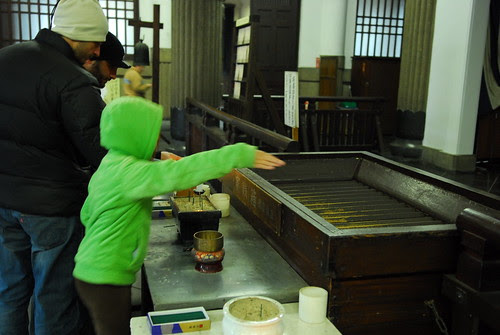 We headed home, had a decent dinner at the hotel restaurant complete with dried smelt, more soba noodles, sashimi and other Japanese treats—and some sake, of course.

The next morning was very early for our 1 ½ hour train to the airport and we were off to Hong Kong!